These are the 11 most popular types of Orchids

The many different flower shapes and colours make the orchid a true design object. There are over 25,000 types of orchids, and every plant is unique. The best-known orchid species is the Phalaenopsis, also called the Moth Orchid. This classic beauty alone is available in hundreds of different shapes and colours. Other highlights from the orchid collection are the Oncidium (Tiger Orchid), Vanda, Dendrobium, Miltonia (Pansy Orchid), Cambria, Cymbidium and Paphiopedilum (Slipper Orchid).

The Cambria-like is a hybrid of various plant species and therefore does not occur in the wild. It’s a collective name for a group of hybrid orchids, the ‘parent’ plants of which come from all over the world. The flowers vary in size and shape tremendously: from 1,5 cm to over 10 cm and from star-shaped to almost round. The flowers are beautifully marked. Brown, red and purple are the colours that predominate, but there are also pink, orange and brown Cambria-likes.

Read more about the Cambria-like orchid

Read more about the Cattleya orchid

Cymbidiums orchids have long, narrow leaves. The plant has at least one branch, but often more. The older a plant is, the more branches it can produce. And these long branches carry six or more flowers, which can get pretty big: up to a diameter of 10 cm. Cymbidium’s colour spectrum ranges through white, yellow, green, pink and red to brown.

Read more about the Cymbidium orchid

In the wild, the Dendrobium grows on trees and rocks. The name says it all: ‘dendron’ is the Greek word for ‘tree’ and ‘bios’ means ‘life’. There are two types of Dendrobium orchids:

Read more about the Dendrobium orchid 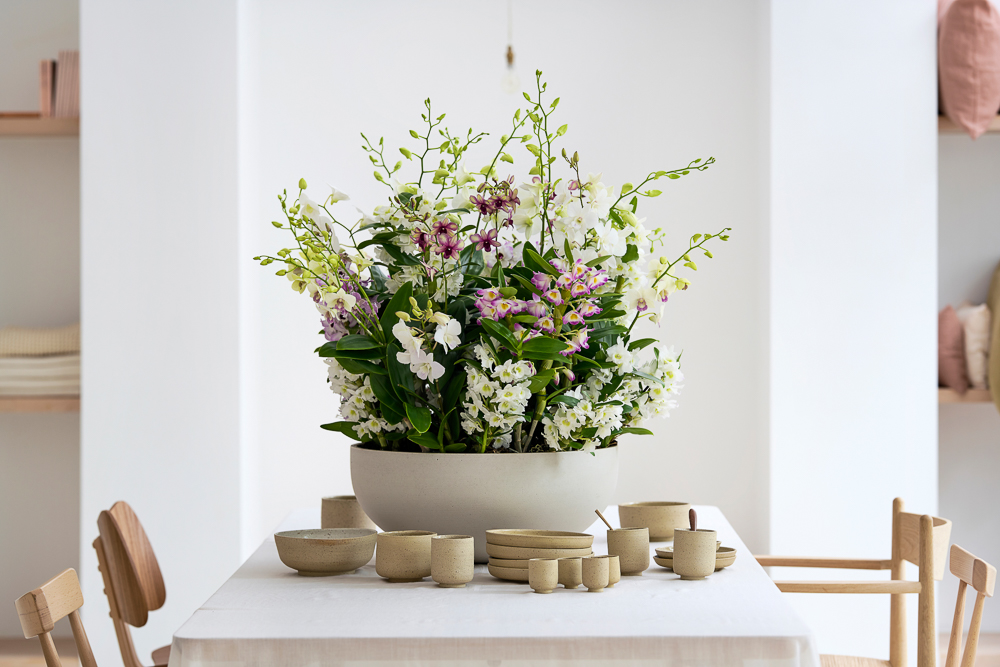 This plant’s name too refers to the way it grows in the wild: preferably on trees, but sometimes also on rocks. The Dendrobium Nobilé differentiates itself from the other types of orchids by the cluster of flowers, which forms opposite the axil of each leaf. This unusual way of flowering on the stem gives the Nobilé a lifespan of at least 8 weeks. The scented flowers are 5 to 8 cm across. The colour ranges from entirely white through yellow and orange to red and purple, and combinations of these colours.

The Miltonia orchid, also called ‘Pansy Orchid’, prefers to grow on sloping river banks, or in any case outdoors. There are hundreds of species which vary greatly in terms of shape and size. There are large-flowered and small-flowered variants, but it’s mainly the large-flowered species that are grown commercially. Miltonia is a pseudobulb-forming plant with one or more branches and around five flowers on each branch. It has between one and four (or even more) branches. The Miltonia orchid comes in many colours, like white, yellow, pink, red and purple. The ‘mask’ is the most eye-catching feature.

Read more about the Miltonia orchid 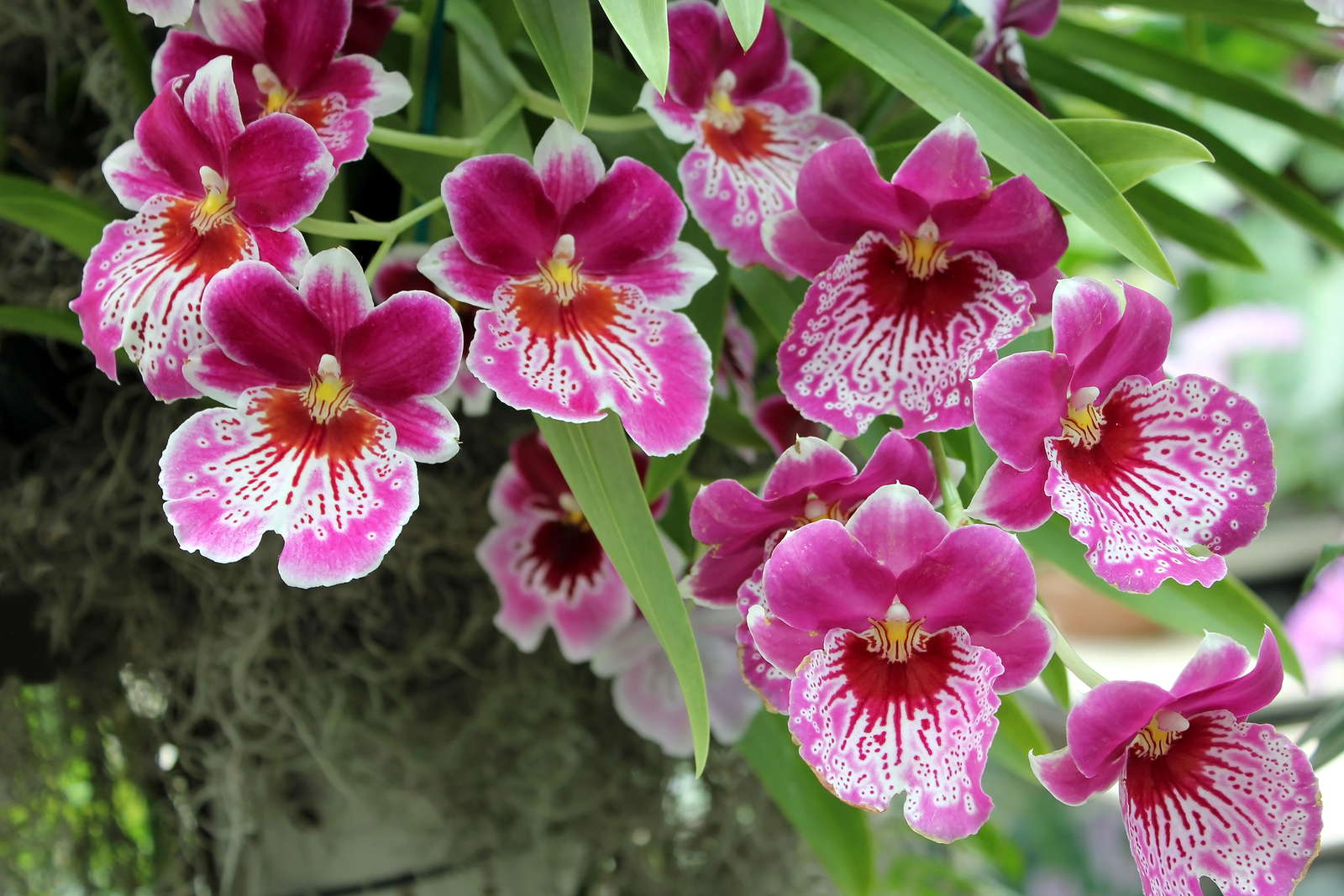 The Oncidium orchid is also called Tiger Orchid and the ‘Dancing Princess’. She owes the latter nickname to the special shape of her flowers, which resembles a ball gown. Oncidium’s flowers are usually around 2 cm across. There are a large number of flowers on each branch. Oncidiums are mainly available in yellow and russet, but also in other colours ranging from white to shades of brown.

Read more about the Oncidium orchid

The Paphiopedilum orchid is also called the Lady’s Slipper or Slipper Orchid. She owes that name to the shoe-shaped lip, that serves as an insect trap. Flying insects are lured with scent and the promise of nectar in the flower. They can only get out through a narrow opening whereby they pass the pistil and the stamens and get the pollen on their body. At the next flower the pollen then ends up on the pistil.

Read more about the Paphiopedilum orchid

The Phalaenopsis is the most common type of orchid, also called the Moth Orchid. The Phalaenopsis is available all year round from florists and garden centres and sometimes also from DIY stores and supermarkets. There are small-flowered species – also called multiflora – with a lot of small flowers as well as standard species. And there are large-flowered species – grandiflora – with flowers which are at least 10 cm across. Phalaenopsis occurs in white, yellow, pink and purple and there are also species with unusually shaped and marked flowers.

Read more about the Phalaenopsis orchid 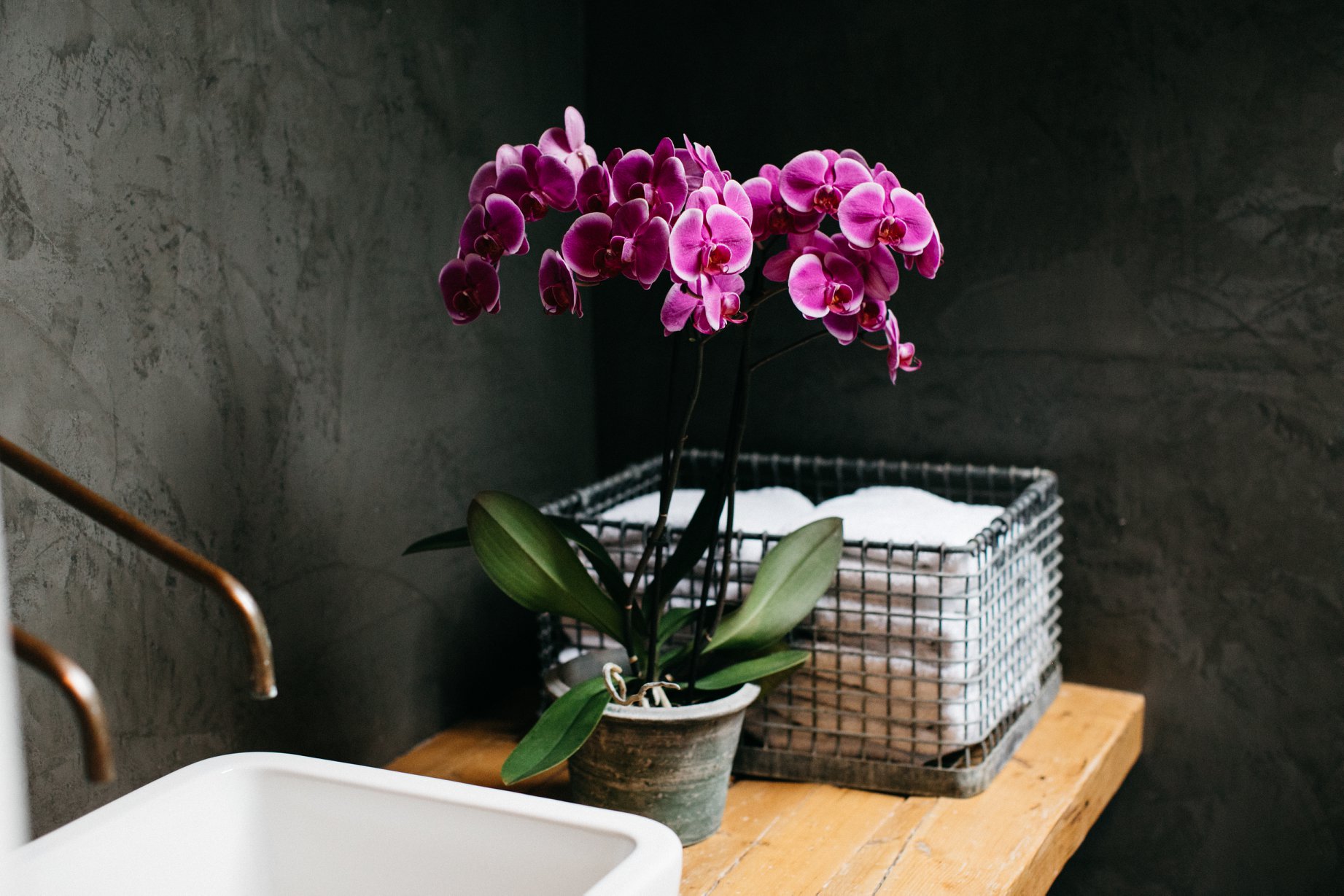 Vanda grows and blooms on trees. The aerial roots act as sponges and can rapidly absorb a great deal of moisture. These roots also ensure that the plant remains firmly anchored to the tree on which it is growing. The plant therefore does not need any earth, potting soil even causes the roots to rot. The Vanda is available in small-flowered and large-flowered varieties. It comes in various colours, from tiny orange to gigantic blue/pink. Vandas are rare orchids and can only be bought at the better florists and garden centres.

Read more about the Vanda orchid

Zygopetalum originates from South America. In the wild, this orchid grows on tree trunks and rocks in damp surroundings. They are available in various flower sizes, ranging from 2 to 10 cm. A new shoot forms a new branch, on which at least three flowers will appear. Zygopetalum is available in blue, red, purple and white shades. Some Zygopetalum cultivars can produce a delightful scent during flowering.

Read more about the Zygopetalum orchid

Sometimes your quest for orchids brings you face to face with a very unusual variety. These exceptional orchids are grown in small quantities and have limited availability. Examples of such exceptional orchids are: Epidendrum, Ludisia, Masdevallia, Erythraeum, Promenaea, Spathoglottis, Psychopsis, Angraecum, Encyclia cochleata (Octopussy orchid), Macodes and Maxillaria. The best chance of finding an exceptional orchid is at the better florists and garden centres.

Another exceptional orchid is the Garden Orchid, such as the hardy Cypripedium. This type of Garden Orchid is sold in the spring and in the autumn when the plant is hibernating.

Read more about the exceptional orchids

There are many different types of Orchids, each with their own scent and color. Each orchid must be cared for in a different way.